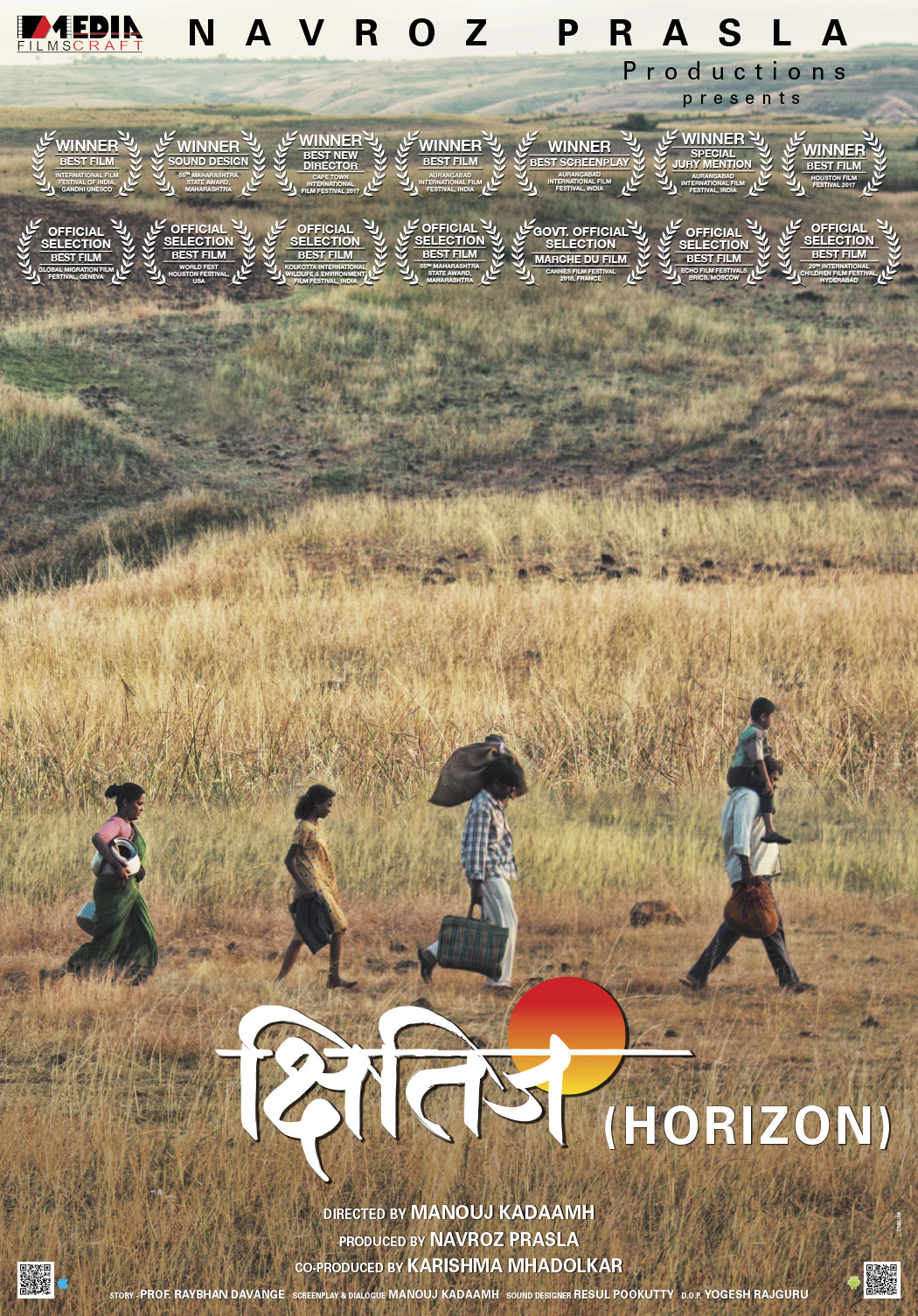 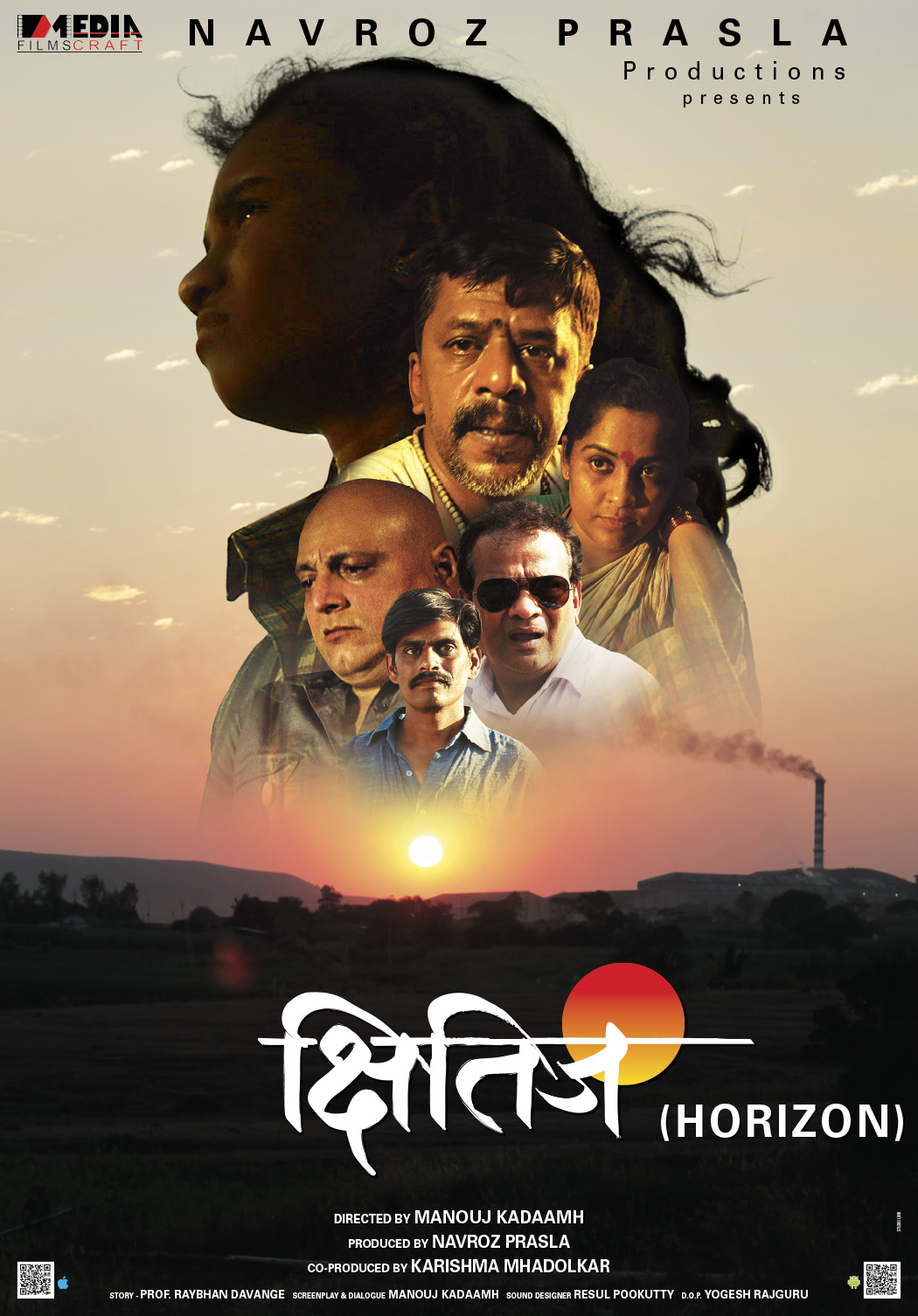 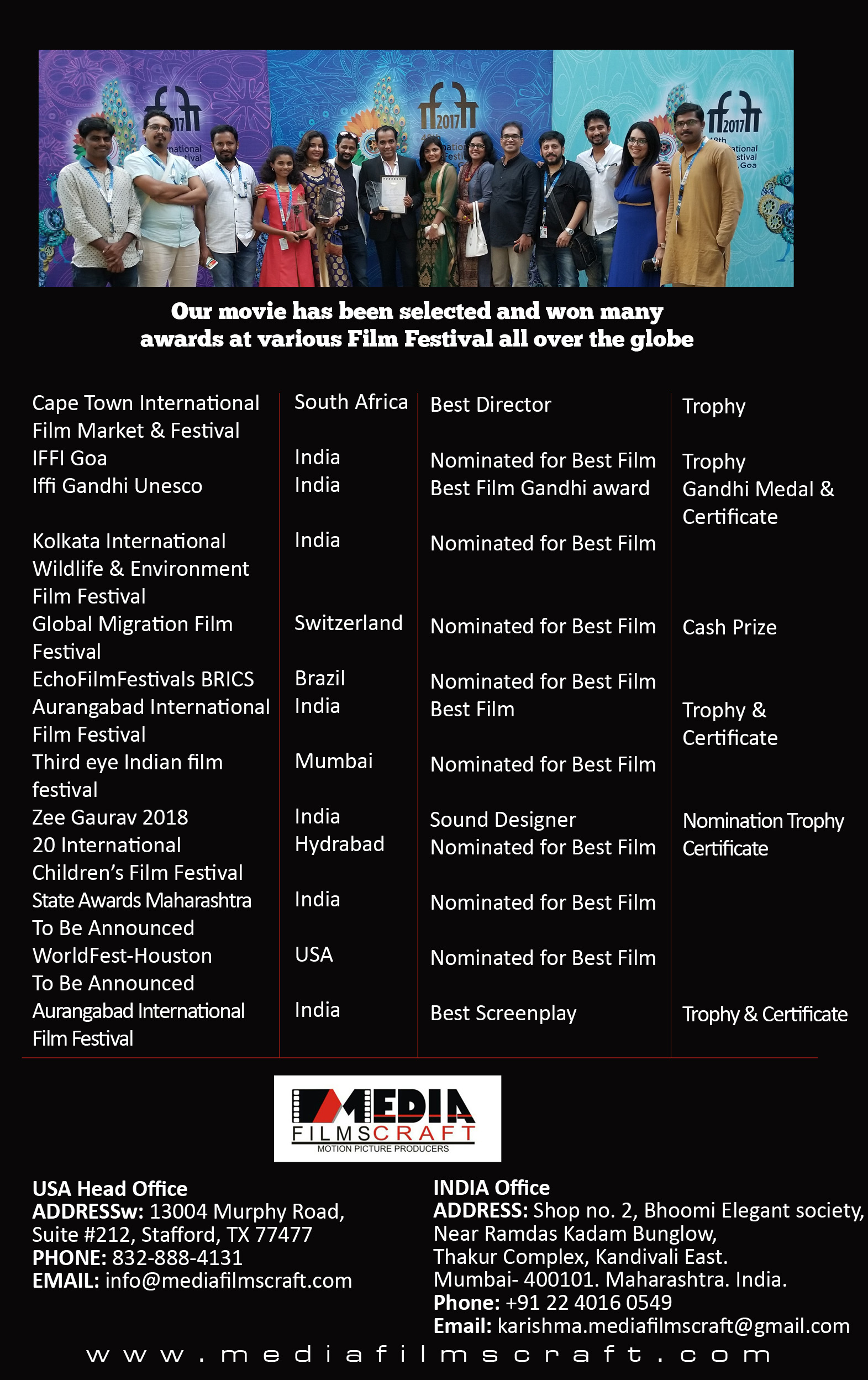 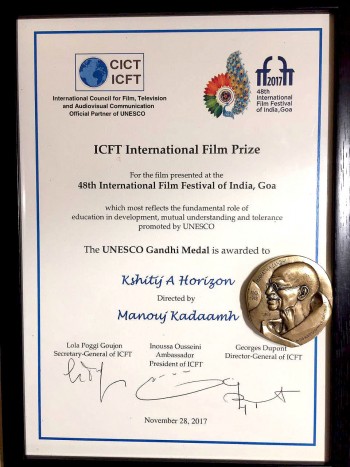 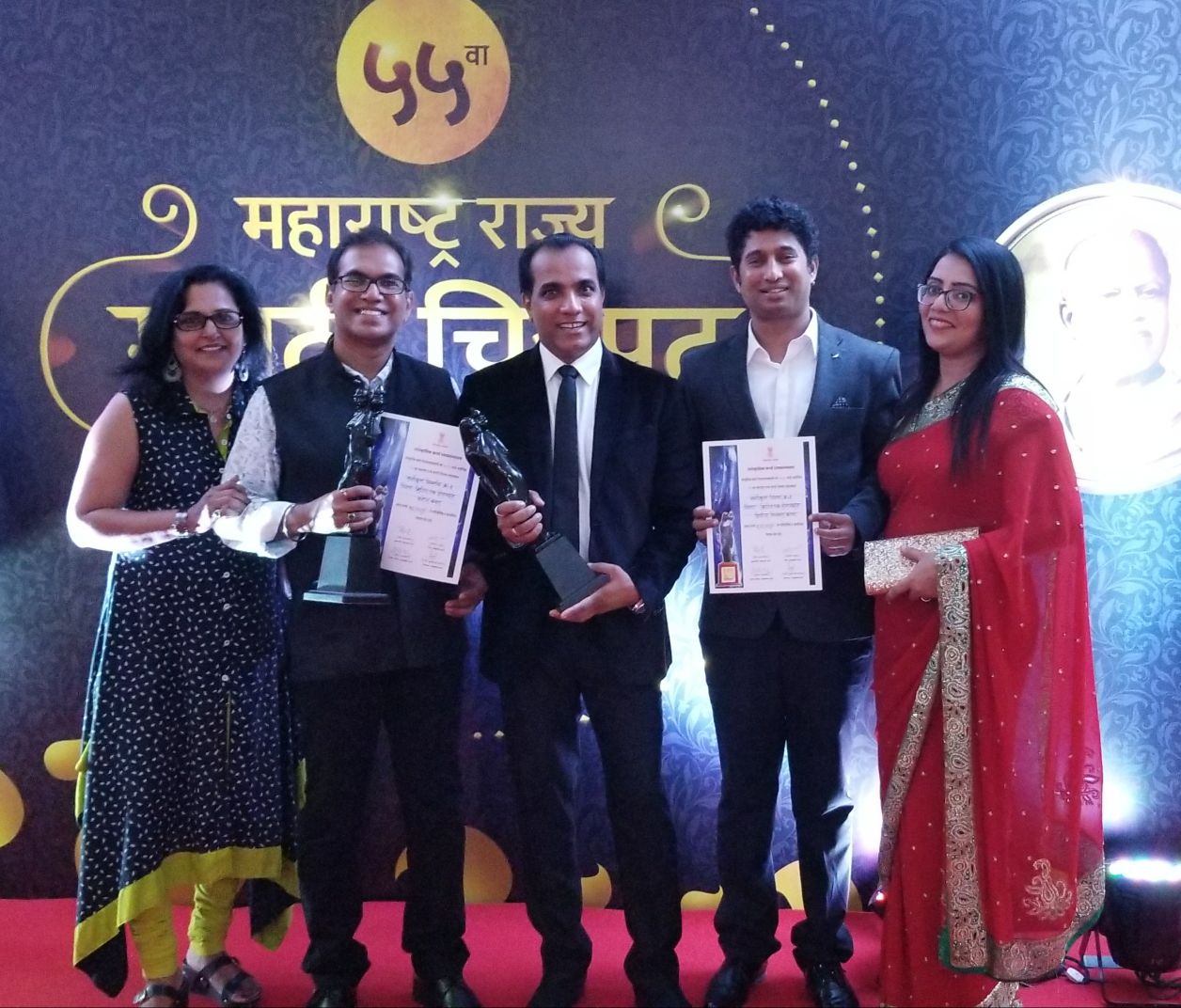 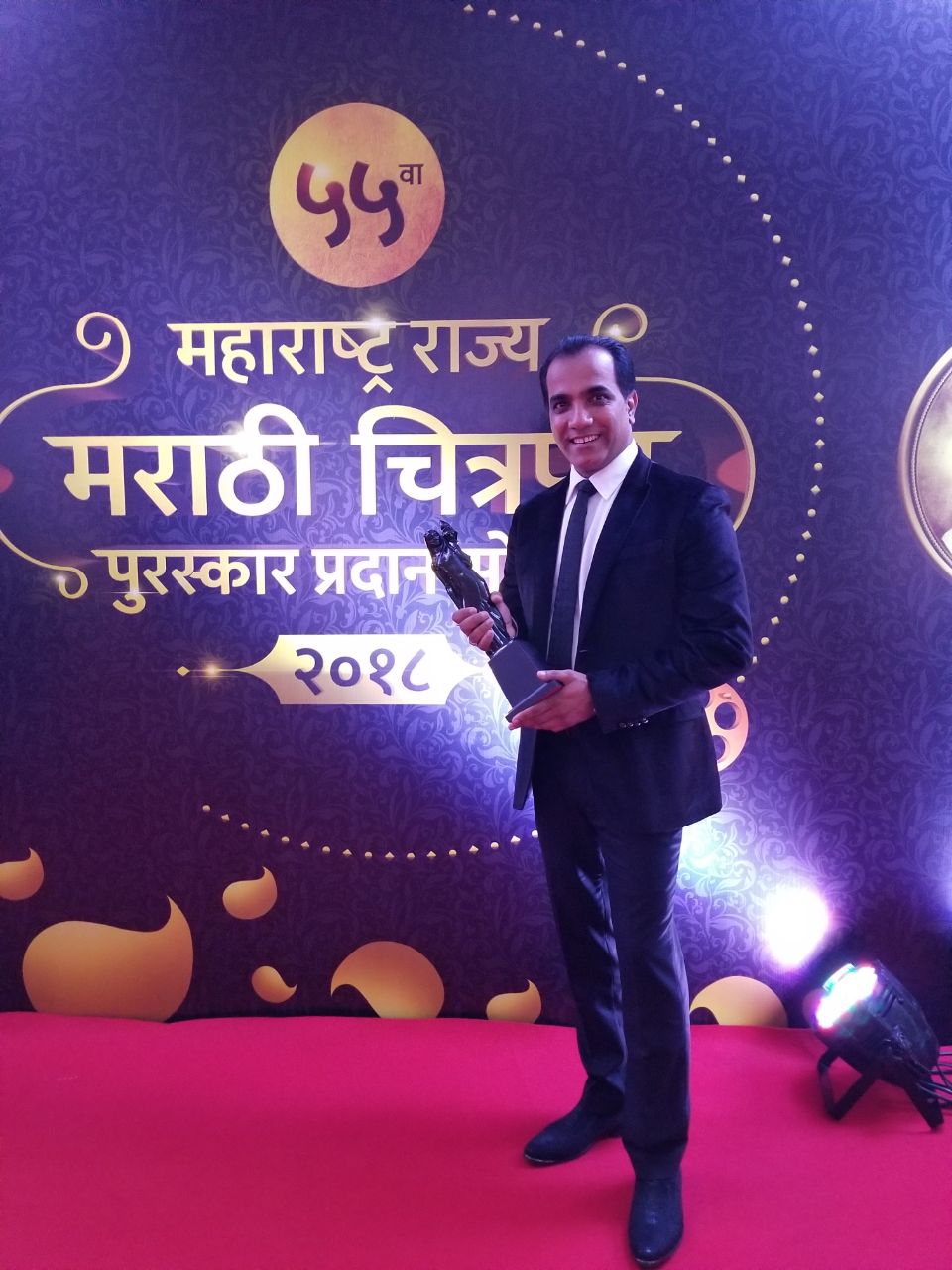 Media Films Craft is headed by Mr. Navroz Prasla who has an association with the Bollywood from past twenty years.
Media Films Craft Inc. represents a unique fusion of American and Indian film cultures. We are not an art house company, we respect good story telling, but our aim is to make movies that are slightly off kilter with a certain edge. Of course, we want to make you laugh...

Kshitij is a story of 12 year old girl’s struggle to continue her education in the face of severe adversity. Poverty forces her family to leave their village and go to a neighboring town to do back breaking labor in sugarcane fields. The girl, Vacchi, continues to quietly find time to study amidst days filled with hard toil, much to the irritation of her father a simple farmer who has very little sympathy of understanding for her aspiration. Vacchi faces all these obstacles with a quiet positivity that finds the way to solve all these problems as they occur. Her efforts however, bring her closer and closer to a confrontation with her father.

Visionary businessman, creative filmmaker, erstwhile photographer, and innovative impresario, Navroz Prasla dons many hats. Hailing from the bustling metropolis of Mumbai in India, where Bollywood, the heart of movie-making beats energetically, it was a foregone conclusion that Prasla would be infused with a passion for sculpting celluloid dreams.

Armed with several years of experience in the industry as production manager, photographer, and in every capacity that enchants on the big screen, he recognized that Bollywood has universal appeal, that language or cultural differences were no bar to the global inquisitiveness and energy that Indian films generated. Intuitively, he saw a niche market in devising those films, of telling those stories, of finding different perspectives to the Indian ethos here in the USA. Young, and replete with ideas that permeated his every conscious thought, he moved to Houston, Texas, and sought to follow his dreams in the land of promised opportunities.

Prasla made it happen. In 2004, he successfully helmed and promoted the US national performance tour of Bollywood film star and comedian, Johnny Lever. The confidence gleaned from that success drove him to ante up on his game. He founded Media Film Craft, a company driven to craft films that are profoundly thought provoking. His first production venture, Kshitij (meaning A Horizon), a Marathi language movie, was shot on location in Maharashtra.

The film tells the story of a 12 –year-old girl’s struggle to continue her education in the face of severe poverty and adversity. Resul Pookutty, an India-based sound designer, sound editor, and mixer, who won an Oscar for Best Sound Mixing for the smash hit Slumdog Millionaire, has lent his talent as sound designer to Kshitij.

​Prasla already has another film taking shape, which is tentatively named Valentine’s Day. He has his ambitious sights set on collaborative ventures with Hollywood, for him the holy grail of movie making.

​Noteworthy is it that Prasla has distinguished himself as a force to be reckoned with in the business echelons. He is also the Founder/CEO of NTV Houston. Navroz Media Network Inc launched NTV Houston in 2017 with headquarters in Stafford, Texas. Aside from entertainment that includes movies and film songs that are curated by our sister office located in Mumbai India and presented on NTV Houston, the local arm also produces community interest coverage from the Stafford studio.

News forms an important part of any TV Channel, in the studios of NTV Houston daily 6 Bulletins are produced covering all the local, international events from politics to sports and the news is given in Hindi.

Optimism, Innovation, and Tenacity are at the core of our corporate culture. We truly believe anything can be accomplished given creativity, innovation, and planning.

We bring your vision to life!

We bring an unmatched work ethic, sense of humor and fun, and a unique vision to everything we do.

MEDIA FILMSCRAFT   can provide the specialty linens, unique entertaining ideas, staging, dance floors and expertise to make your event both unforgettable and cost effective. We specialize in transforming any raw space into an elegant venue. We also understand your bottom line and work closely with our clients to stay within budgets yet deliver both incredible and affordable ideas

You need to see the big picture as well as the tiniest of details. You need Vision.We’re flexible, fast, responsive and reliable.

We get motivation from our satisfied customers and to get that motivation we make sure that every event we manage makes talk of the town.

Our true passion is making our clients look good. A successful event for them is a success for us. We want your guests telling you that your event was the best they’ve ever attended. And we want you to feel  free to take all the credit. We know that you’ll call us back for your next event

Sagar Mhadolkar, a native of Karnataka  began studying  dance styles as a teenager, whereas his passion towards the art has been cherished within him from his childhood.  Later he assisted  the Ace Choreographer  Mr. Sanjay Pradhan (Lolly Pop), and Pappu-Malu. He has performed over 150 shows all over world.

Today Dance  Academy has over 1000 students & 8 studios in Mumbai.

In  2010, he started ‘Dance Academy’ in Mumbai and it has grown from strength to strength ever since. Courses are held here in many styles, from Modern (Ballet, Jazz, Contemporary, Hip Hop, Salsa, Ballroom, Belly Dancing, Bollywood, Freestyle & more) to Classical (Bharatanatyam & Khatak). The Academy has been nurturing a new generation of dancers and choreographers who are all set and ready to bring in their creative side to the art form.

He began learning this art form as a hobby with no clue that it would be his passion in the forthcoming years. In 2009 he got himself enrolled into various workshops conducted around India and trained rigorously under veteran masters. His love towards teaching dance is humongous and is so willing to learn consistently.

Our main focus is achieving the goal of good health & result oriented fitness globally, through a new scientific method in terms of exercise & through right education.

Aim is to make people aware about right fitness with right nutritions through educating them so they can enjoy the beautiful sight of the life by keeping themselves fit.

Choreographing workshops on official retreats to the weddings to watch out for, he has done all this and more. SAGAR is  a name to reckon with in the industry- be it in Films, TV, Music Videos or Concerts.

SAGAR brings vibrant energy to the  stage – and to any stage across the globe looking for the best of modern and traditional Indian dance. Exciting young Mumbai choreographer  in much demand from Mumbai  to Muscat, from Dubai to Dublin, in Houstan, , Lucknow and Shimla.

Weddings shine brighter than the stars with SAGAR.

He takes special care to give weddings, big or small, the same attention they deserve, and make weddings shine as bright as fireworks!

Dancing workshops is his personal favorite! He get’s to interact & teach what he loves  the best! In the process we become friends & make connections for life… Dancing workshops have been a way of confidence building .

Watch Making of Kshitij A Horizon